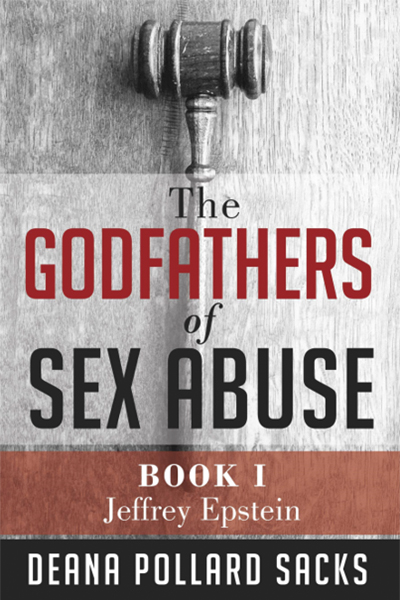 On July 6, 2019, Jeffrey Epstein became a household name as an international sex trafficker of underage girls, serial sex abuser, and confidant of the most famous, rich, and powerful men in the world. Barely a month after his arrest, he was reportedly found dead in his prison cell, supposedly by suicide. Numerous investigations are ongoing, to find out how he really died–but the public has been kept in the dark.

In this first of a series of books about the most notorious #MeToo era sexual predators, author and law professor Deana Pollard Sacks offers the most comprehensive look ever at the sordid life of Jeffrey Epstein. Her research is impeccable and synthesizes news stories, court cases, and interviews–along with her keen observations–to give the reader a full picture of the life and crimes of this twisted sexual pervert.

In this scathing indictment, Professor Sacks reveals the gross incompetence and bald corruption of certain government officials who aided and abetted the sex abuser, and exposes the media outlets who enabled Epstein’s crimes by withholding the truth from us all.

This book is a must-read for any #MeToo survivor or follower, concerned citizen, or individual who is fed up with having one justice system for the rich and another for the rest of us.

Deana Pollard Sacks is a professor of law at the Thurgood Marshall School of Law in Houston, Texas. Her research centers on implicit bias, children’s development, sex tort liability, and regulation of dangerous speech. She is a contributing author of Implicit Racial Bias Across the Law (2012) and has authored numerous law review articles, including “Sex Torts.” In 2014, she started a grassroots talk show called Meet The Professors, www.MeetTheProfessors.org, to provide free access to a conversational forum in which leading academics discuss decades of legal and scientific research concerning social issues such as the influence of sexual and violent media on children and the sexual disease epidemic. Deana can be reached through the Sacks Law Firm in Houston, Texas.